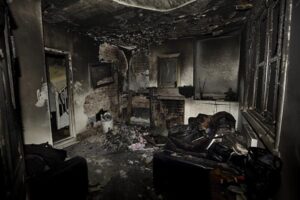 When your Roswell home sustains fire damage, what is left behind can seem overwhelming. One thing you need to understand though is that there are three different types of fire damage. The first is the damage from the flames, which is what most people picture when they think about fire damage. The second type of fire damage is damage from smoke, and the third is damage ensued from substance and efforts to extinguish the fire. Each of the three has its own issues, so it is beneficial to understand what they are and how they can affect your home.

Let’s go over each type of fire damage in more detail so you know just what you are up against.

Depending on the fire’s origin, there are several kinds of flame damage your home can sustain. For instance, an electrical fire will cause different damage than an open-flame fire. Different sources of fire can generate more heat at their origin than others, which may, therefore, result in more damage where the fire itself actually started. Many times, walls, floors, support beams, and other building components of your home will need to be replaced because of structural issues resulting from damage caused by the actual flames and heat of the fire. Whereas other forms of fire damage, like smoke damage, will only cause surface-level damage to these materials. This type of fire damage is definitely the most destructive and flame damage can burn things down so that there is nothing left.

After a fire has been extinguished, smoke damage can linger for several weeks or even months. This is because the smoke has a tendency to attach to objects and materials, becoming embedded in them. Similar to fire damage from flames, the degree of smoke damage is often determined by how close an object was to the fire source. That being said, smoke travels through the air and smoke damage can be found in rooms where no flames ever were. Smoke damage can also vary depending on fire burn time, burned substance or fire fuel, area ventilation, and impacted surfaces. Porous materials, like fabrics and textiles, will absorb more smoke than stone or cement, so the materials exposed will also play a role in how serious fire damage from smoke is.

Fire damage is not merely restricted to that brought on by flames and smoke. A house fire can lead to a plethora of additional issues, one common one is the water damage that ensues from fire extinguishing efforts. Water damage can weaken the structural integrity of your home, which is already susceptible to fire damage. If chemicals were used, like those found in fire extinguishers, professional cleaning will be required to remediate the damage to surfaces that were sprayed with the extinguisher. Any openings to your home left behind from the fire, like broken doors, windows, or fire damage that burned holes in roofs or walls, leave your home susceptible to damage from the outside elements as well as the damage it has already sustained from the fire.

In summary, fire damage is devasting, in all its forms. The good news is Restoration 1 of North Atlanta is here to help. We specialize in fire damage cleanup, repair, and all types of restoration for all different types of damage.

By providing emergency mitigation services and reconstruction services, we can take care of your property damage from start to finish.

Serving areas in and
around: